Nicole Jessé from We Own Rotterdam interviews Massimiliano Dosoli, composer and musician studying at Codarts in Rotterdam. 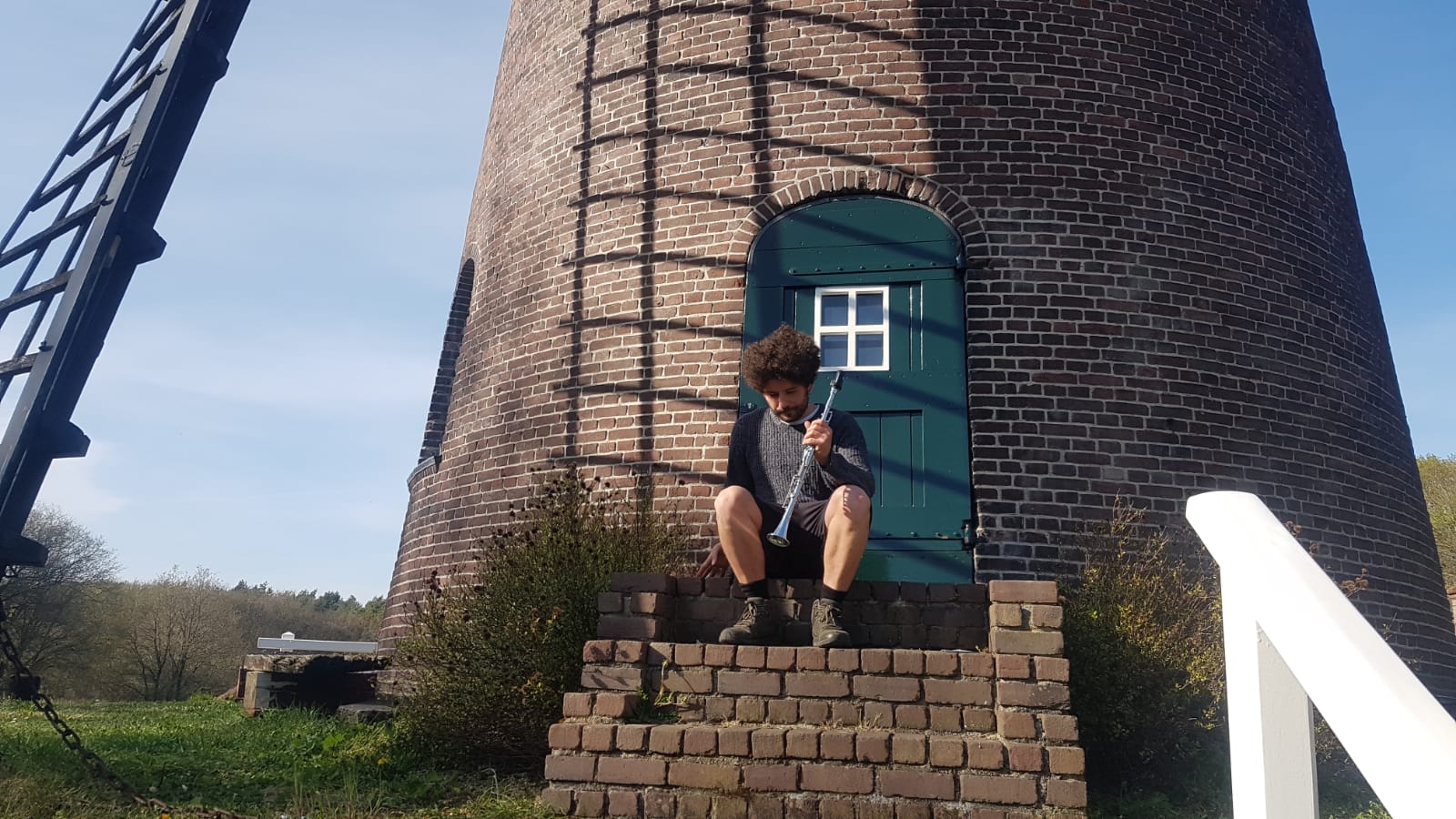 Tell us a little about your music, and what excites you about the music scene here in Rotterdam?

My music at the moment spans many projects. I compose for my quartet – a jazz-rock quartet called SuperPostHardBop which is comprised of drums, double bass, bass clarinet and saxophone – my first project since I started meeting players here at Codarts. We incorporate ideas from free-jazz to rock and progressive rock. Our sound is very much inspired by Tom Waits, but there is also a lot of improvisation. We have two video clips coming out soon – one for a song called ‘California Station’ which we shot with two dancers, and another which features animation by a friend of mine. I wrote both these songs whilst living in Rotterdam studying composition, so they definitely represent my experiences here. The colours of the city, the school and the Rotterdam scene are inside of them for sure.

My latest project, and the one I’m most proud of, is the Plankton Orchestra. I formed a band of 25 people in one night. I sent them all a message and they replied enthusiastically, then after one week we had our first concert. It was a crazy night at a squat house party in the south of Rotterdam – probably the best experience I’ve ever had in my life. Some exciting things are cooking in this period with the orchestra, but it’s not easy to organise a meeting with 25 people at the moment. I designed a game where I play cards with the audience which will then trigger what the orchestra plays, but I won’t say too much about that as I don’t want to spoil the surprise!

The musicians I play with are my friends from inside the scene and they come from all over the world. We have any instrument- you name it! This eclectic, international feeling is the symbol of the music scene here – and of what Rotterdam is for me.

Tell us three things you did recently which made you happy?

I contacted one of my heroes, Ben Goldberg – probably one of the greatest clarinet players currently active in the jazz scene, and was finally able to have an online lesson with him. We meet every week and it’s amazing. He is the kind of teacher who doesn’t just teach music but also opens up a lot of conversation about deeper layers of expression. Hopefully, I’ll make it over to San Francisco to have a lesson with him in person once this is all over!

The best thing I’ve listened to in these months since I’m spending so much time in the middle of a forest is how amazing the birds are and how much we suck compared to them as musicians and singers. We completely suck. They are incredible. I bought a super nice portable recorder as I want to transcribe what they sing. I think that if humankind starts to become a bit less egocentric and listen not only to what other people say and do but also to what other species do and sing, there is an immense amount out there which can help us a lot in this period. A period in which, for example, there are no concerts. If you pay attention to the outside world, things are happening.

I also finished my first improvisation board game called Death-melody-question Mark. It’s similar to Monopoly in which you throw dice, play cards, and win and lose points but it’s for free improvisers, or even electronic music and live electronics. It’s very inspired by John Zorn’s work ‘Cobra’. I had so much fun writing the cards. One instructs a player to play a scale while another player has to try and make them laugh and unable to play, and another card instructs a player to play the trumpet with the opposite hand – unfamiliar things. It’s stupid and simple, but funny to play and a nice way to create a piece of music. I sent it to my friends from the Amsterdam conservatory – two trumpet players, a trombone player and a french horn player – so I’m very curious to hear the first review! 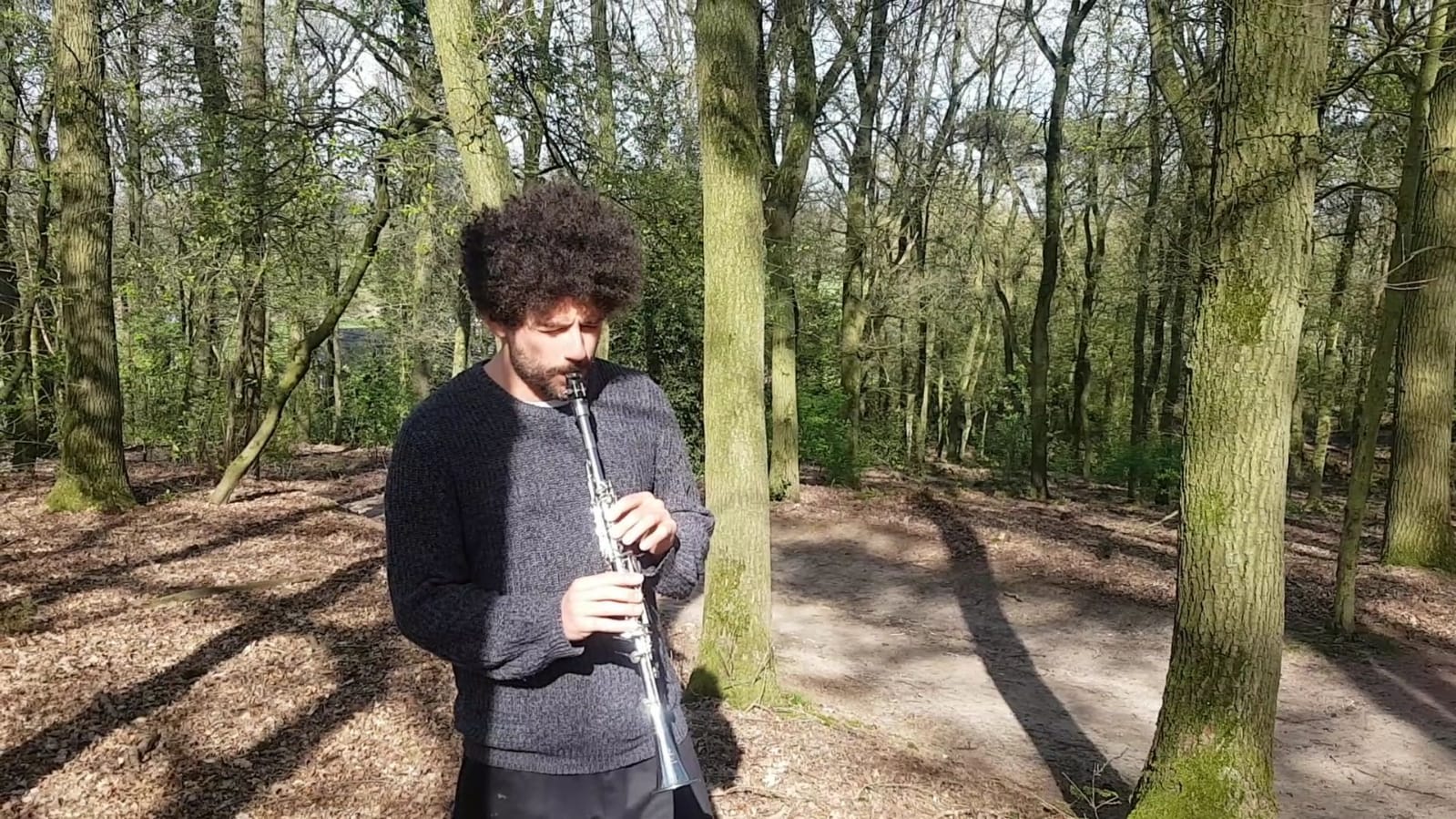 **A little recommendation from Massimiliano for a creative exercise to help you stay inspired every day:

This is an exercise which Ben Goldberg gave me. When you have just woken up, and are still yawning and making your very first movements of the day, take your clarinet and play something. The first thing you play is the most personal thing you will ever play during that day as your mind is completely free and not yet distracted by any other thoughts. Every time I do this, I record it and form a little musical piece. I have gotten so many beautiful melodies which will become songs or arrangements for the orchestra. It is a thing which triggers the subconscious part of your music – the moment at which you will not judge yourself. I would suggest this to any artist or to anyone at all who wants to feel inspired, whatever your instrument or artistic tool may be. Salvador Dalí did this also – he fell asleep with a paintbrush in his hand and would wake up and paint something and then fall back to sleep. It’s a great mindfuck exercise.

How have the current social restrictions due to the recent outbreak of Coronavirus affected your day-to-day life as a musician?

Well, there’s the work factor. All gigs and concerts have been cancelled and so money-wise it has become difficult. I also lost some private tutoring jobs as some of my students are not young and are not familiar with online lessons. In this sense, for sure it has been a very heavy impact. In my case, as a composer, I can still do a lot of work from home, but I feel especially sad for all the great musicians and performers whose only source of income is to perform. It’s devastating for them.

As a musician, you are so used to being outside and you need the experience of the outside world much more than with other jobs. Interacting with people every day and seeing concerts is a big part of my inspiration – everything outside influences me and now that has all stopped. One positive outcome though is that all the non-influence from the outside world has caused me to connect deeply with what I want as a musician. It has given me a lot of time every day to work on sounds and concepts – things I usually don’t have so much time to work on as daily life and socialising gets in the way. This period has given me more than 30 days of beautiful work so far.

Plankton Orchestra – Song of the Dispossessed (Dead Can Dance)

Have you found any creative ways to deal with this lack of freedom?

I built a basketball hoop from a sack of potatoes and some scrap metal I found. I am also becoming a master-chef. Really heavy stuff. I’ve been making parmigiana, Tortelli… and I also made some fried sweets from the south of Italy. My cooking has been very creative lately.

Another thing I am hoping to do is to connect people in my neighbourhood through performances. I live in a little street in the centre of the city with two circus artists, three dancers and two musicians. I want to ask if the residents of the street would like for one of us to do a 30-minute performance each night.

What potential role can music play for people in a time like this?

At the moment, I’m staying in a windmill in the middle of the forest and there are a lot of people who walk by. Each morning, after I have practised for at least a couple of hours, I go outside and play a little bit and people are clapping their hands. They are so happy to hear some music. They take the time to stop and listen to me playing. One day I was walking in the forest playing my clarinet and two people stopped me. They told me about a lady in a wheelchair who lives close by and was turning 50. They asked, “would you like to come to the end of the garden and play a few minutes of music for her?”. So I went and they were so happy. I wouldn’t be playing inside a forest normally, I would be practising during the day, then playing at a concert hall, or Dizzy’s in the evening. But here, if I see that it’s enjoyable for people then I stay and continue to play.

Music can play a big role for people during this time, but also this moment can, in turn, affect how people consider music – especially live music, and understand its importance within society. When you have so many opportunities to experience live music for free around the city, for example when you go for a beer and there is a performance in the background for free, you don’t realise how much effort there is behind it or how much you would miss that moment if it disappeared. Now I think people are realising it. How can the Rotterdam public help to support the local music community during this time?

Focus on the creativity which exists in your neighbourhood, and get to know which artists live in your street. There is a real possibility for neighbourhoods to self-organise at the moment. Encourage live performance and creativity which everyone can benefit from, even when they’re in isolation. Suggest a 5 euro donation from the neighbours on your street for a performance which people can watch from their window or balcony. Or even just show your appreciation by giving them a beer. They’ll appreciate it! I think that these things could happen quite easily.

Are there any initiatives (music or non-music related) which are inspiring you at the moment?

Currently, I’m working with the Operadagen Rotterdam who has moved their projects online. The project I’m involved with is called Home Sweet Home. The concept is really nice, every one of us has to make an arrangement and they send me the main music file and I record the clarinet over it, then it’s sent to the singers to sing their part and so on. I feel very lucky to be a part of this.

Another thing I’m really happy to be a part of, is an initiative called Balkonparade, a performance initiative organised for elderly people. We play music while they watch from their balconies – it’s really great!

What do you hope to take away from this experience, moving forward?

I have realised that I am a person who is very easily influenced by my surroundings. This is a beautiful thing, but it can also be very distracting when you are on your way to realising your dream. When you finally have the tools and the opportunities to be able to achieve your goals, it can be easy to waste away the time to be able to make it happen because you are spending too much time doing the whole ‘social’ thing. This period has taught me how strong I can be when I have the time and focus to maintain the quality of my work. For me, life is about meeting a lot of people and being influenced by all of them, but I want to learn to take influence from the beautiful aspect of the social thing, without getting drawn too far into it until it becomes unproductive. This was a big lesson for me during this period.

Check out our online cultural calendar at We Own Rotterdam